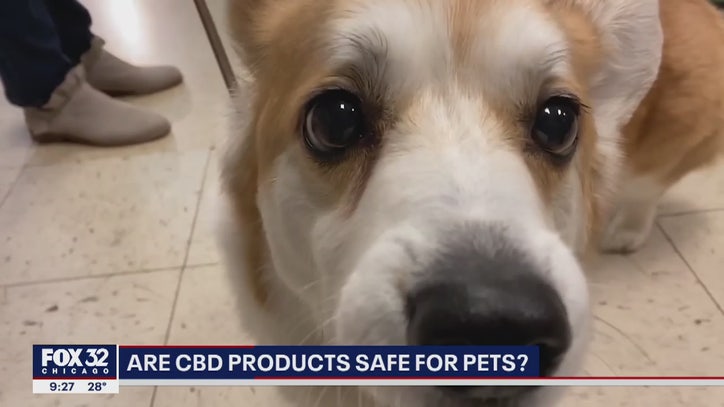 Are CBD products safe for pets? Owners swear by it

Many people feel if CBD oil is safe for humans, it has to be safe for our pets. But that’s not what some professionals believe.

CHICAGO – Although it was once considered taboo, many people now use CBD products to ease aches and pains, reduce anxiety and improve sleep.

And now, some pet owners are swearing by its miraculous effects. But it’s not FDA approved yet. So is it safe?

Many people feel if it is safe for humans, it has to be safe for our pets. But that’s not what some professionals believe. Despite this, it is already being used to treat anxiety, arthritis and even fight cancer in dogs and cats.

When 2-year-old Winnie has a seizure, the dog’s Rockford owner gives her a few drops of CBD oil. In two minutes, Winnie stops shaking and has calmed down.

“Although we’re concerned that we don’t have FDA approval, we’re also very excited about the potential here,” said Dr. Gail Golab, the chief veterinary officer at the American Veterinary Medical Association in Schaumburg.

Dr. Golab has been working with the US Food and Drug Administration to get CBD products tested for use in pets. But right now, very little is known about it.

Winnie has seen dramatic results. Her owner found the product at Noah’s Ark Pet Supply in Winnetka. The store sells CBD in oil, capsules, treats and a lotion that can be rubbed behind their ears.

“All the benefits of medical marijuana without getting your dog high,” said Noah’s Ark Pet Supply assistant manager Kelsey Bennett.

Benjamin, 9, and 4-year-old Boden are also CBD converts. The oil is placed on their dinner and they gladly gobble it up every night.

“We had recently moved and both dogs took it harder than I thought” said Elisabeth LeBris. “They were more anxious, they were more territorial than they had ever been.”

But with a few drops of CBD oil, they barked less, they were easier to calm down and they showed less frantic behavior.

Dr. Golab says we are years away from FDA approval of CBD use in pets, and there are risks. Too much, she says, can be nearly fatal.

“We know on the human side that CBD and other cannabinoids can potentially interfere with drugs that are given to people and we have the same concerns with drugs and animals,” Dr. Golab said.

Products range in price, but generally start around $40. Priceless, some say, for pets who are desperate for relief.

“Your doctor may recommend that you take Vitamin D because you’re deficient, but that’s not approved by the FDA either but it works,” Bennett said.

Noah’s Ark Pet Supply recommends you research a CBD product before you start using it on your pet, find out what type of oil is mixed with the CBD and how much, and see if it is organically grown and independently tested.