For thousands of years, cannabis plants have displayed their multifaceted flexibility in seemingly unrelated applications. They have been employed for religious rituals as well as for the preparation of paper or cordage, and even for apparently contradictory usages such as recreational scopes and medical treatments. Cannabis plants contain hundreds of components, among them, cannabidiol (CBD), a molecule that is being considered for potential applications in medicine as well as in skin care. CBD can make up to 40% of cannabis extracts and can be supplied as CBD oil containing only CBD as the active ingredient and totally free of tetrahydrocannabinol (THC), the major psychotropic component found in cannabis.

As of today, scientists in bio-medicine are exploring the effects of CBD on anxiety, cognition and pain, and uncovering their mechanisms of action. The medical interest in CBD originates from the discussions about the medical use of the psychotropic component of marijuana smoke as well as from the marketing opportunities opened by the legalization of its use. No one, though, is quite sure about the possible domain of application, the anticipated efficacy or the multiple modes of action of CBD. It is often the case that an active drug exerts its activity by binding to receptors within cells. Cannabinoid receptors have been identified in cells within the human body. Cannabinoid receptors are able to bind molecules produced in the brain (called endo-cannabinoids) as well as plant cannabinoids (called phyto-cannabinoids) such as CBD and participate in multiple metabolic mechanisms.

There are two types of cannabinoid receptors. The ones found in the brain, and also in the lungs, liver and kidney, are called CB1. The other ones, called CB2, can be found in some cells of the immune system, in cells programmed to become blood cells (hematopoietic cells) and on the endings of peripheral nerves. The cosmetic and skin care interest in CBD is justified by the fact that keratinocytes contain both types of cannabinoid receptors. This does indeed suggest that the skin might be affected when particular molecules bind to these receptors in the keratinocytes, perhaps by modulating wheal and flare in inflammatory reactions or by reducing the pain and discomfort associated with a range of skin conditions. Studies with cultured cells and animal models support this hypothesis.

The effects of CBD on human sebaceous gland were studied in culture and it was observed that CBD behaves as a highly effective sebo-static agent. Administration of CBD to cultured human sebocytes and human skin organ cultures inhibit the lipogenic actions of various compounds, including arachidonic acid.2

Anandamide is an endo-cannabinoid that binds to CB1 and CB2. The binding of anandamide to its receptors suppresses the synthesis and the secretion of inflammatory cytokines such as IL-2 and IL-23 by cultured human keratinocytes treated with the large pro-inflammatory polypeptide Interferon-γ.3

Another in vitro effect of cannabidiol is that it increases tyrosinase activity and melanin content in cultured human melanocytes.4 Although experiments with cultured human melanocytes are often misleading when it comes to decreasing the intensity of pigmentation, the observed increase of tyrosinase activity and accumulation of pigment might indicate that CBD does indeed exert an action on pigment production.

This is to say that, among cannabinoids, cannabidiol is perhaps the most interesting compound; furthermore, it lacks the psychoactive properties of THC and is not subjected to heavy legislation. In addition, in contrast with the action of THC, it does not increase the level of β-endorphins in the plasma and in the hypothalamus.

Cannabidiol is presented, sometimes too optimistically, as being anti-inflammatory, analgesic, hydrating, moisturizing, wrinkle-reducing, anti-aging, anti-acne, anti-eczema, anti-psoriasis, and anti-itch. However, as of today, data about its safety and efficacy are still limited. And yet, there are plausible mechanisms for cannabidiol to have positive effects on skin, and there are documented consumer benefits for ointments containing cannabis oil.

CBD does not have the same psychotropic activity as THC and has been reported to relieve the feeling of anxiety experienced by individuals exposed to THC. Peter Grinspoon suggested5 that the results obtained in treating the childhood epilepsy syndromes that do not respond to the usual medications, do provide the best evidence for the medical efficacy of CBD. Indeed, the administration of CBD reduced the number of seizures and in some cases was able to stop them altogether.

CBD is recommended to treat anxiety and may help individuals prone to insomnia with falling asleep and remaining asleep. Animal studies indicate that topical application of CBD helps reduce the pain and modulates the inflammatory responses associated with arthritis. The mechanism of action of cannabidiol taken by the general route to treat inflammatory and neuropathic pain in rats has been recently understood.6

As of today, however, results obtained by administering CBD to human volunteers targeting physiological or psychological endpoints (cortisol levels, alertness, dizziness, confusion, anxiety and psychosis) indicate that the observed effects of CBD were not all statistically significant.7

The results from in vitro studies and from clinical observations have prompted some experimental work to assess the efficacy of topical CBD on human volunteers. A CBD-containing topical ointment was applied twice a day for three months on the skin of 20 patients with atopic dermatitis or psoriasis. Hydration, transepidermal water loss and elasticity were the endpoints of the analysis. In addition, photographs were used to follow the progress of the status of the skin and appropriate questionnaires were used to assess the severity of atopic dermatitis (SCORAD) and psoriasis (PASI). It was observed that topical treatment with a CBD-enriched ointment improvesd the conditions of the skin, the symptoms and also the PASI index score. Neither irritation nor allergic reactions were observed during the treatment.8

In a study aimed at learning about the effect of CBD on sebum production,9 a cannabis seed extract was added (3% final) to an ointment and the ointment by itself was used as placebo control. The placebo and the extract-containing base were applied twice a day for 12 weeks, to the half face of male volunteers so that each volunteer was his own control. It was observed at the end of the study, that the level of sebum in the cheeks treated with base plus 3% cannabis seeds extract was lower than the sebum level in the cheeks treated with the placebo. The results were reported to be statistically significant (p<0.05).

It may also be of interest for the fragrance market that combinations of THC and CBD were used to study the effect on nocturnal sleep and early morning behavior on young adults by spraying on the oral mucosa. It was observed that THC had a sedative effect whereas CBD had alerting properties as it increased wake activity during sleep and counteracted the sedative activity of  THC.11

There is a great potential of utilization of cannabis oil in skin care. As a matter of fact, the topical use of CBD can decrease skin inflammation and skin discomfort, as well as reactions such as pruritus, a form of severe skin itching affecting aged skin, thus offering a possible new approach for anti-aging products. The sebo-static effect of CBD could make it the molecule of choice when trying to optimize anti-acne treatments. And the suggested pro-pigmenting effects might be of interest for consumers who want to protect their skin with sunscreens against ultraviolet radiation, while acquiring the beautiful suntan associated with outdoor activity and vacation time. All this, of course, will need appropriate formulations for the active ingredient to penetrate the epidermis and reach its receptors. 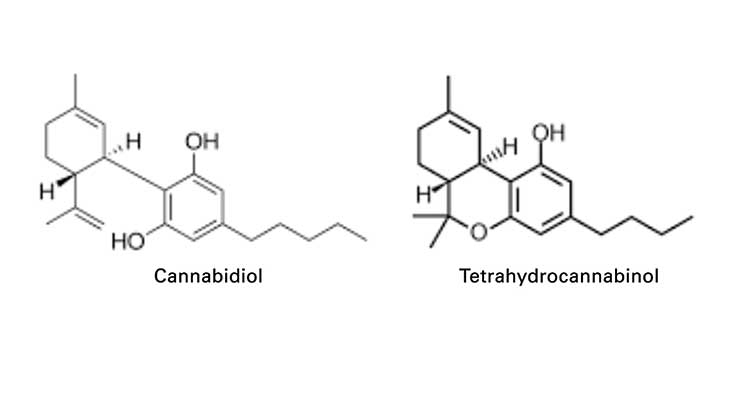 One could therefore surmise that appropriate solvents for cannabidiol could be Finsolv TN (C12 alkyl benzoate, with Log Kow = 6. 75), Lexfeel 7 (Neopentyl glycol diheptanoate with Log Kow = 6.48) or dodecane (Log Kow = 6.88)

Experimental data point to a great potential and to a diversity of applications of cannabidiol in skin care. Efficacy data are not numerous and only a few of them are robust. As of today, the legislators/regulators have only partially expressed their feelings about extracts from plants containing psychotropic agents.

It can be anticipated that the consumer would fancy the use of natural extracts, but cannabis extracts could be contaminated with THC or other psychotropic cannabinoids. It will, therefore, be necessary to introduce purification steps and extensive analytical work with increased production costs. In addition, botanical extracts are subject to seasonal variability that may affect the final content of the actives that are desired. Therefore, plant cell cultures could represent a reliable system of production and Cannabis sativa cells can be propagated in the laboratory but do not produce cannabidiol and should undergo a genetic engineering process to do so. Unfortunately, the technology to transform cannabis cells to produce cannabidiol only is not yet at hand.12

Is there sufficient scientific knowledge for introducing CBD in the skin care market? Perhaps not yet, and excessive haste may make the project obsolete before it becomes mature. Yet, the progress of research is extremely swift, and excessive prudence may prove fatal to cautious marketers. For the time being, what is needed is the generation of safety and efficacy data in different formulations for different applications, while getting ready to enter the market.