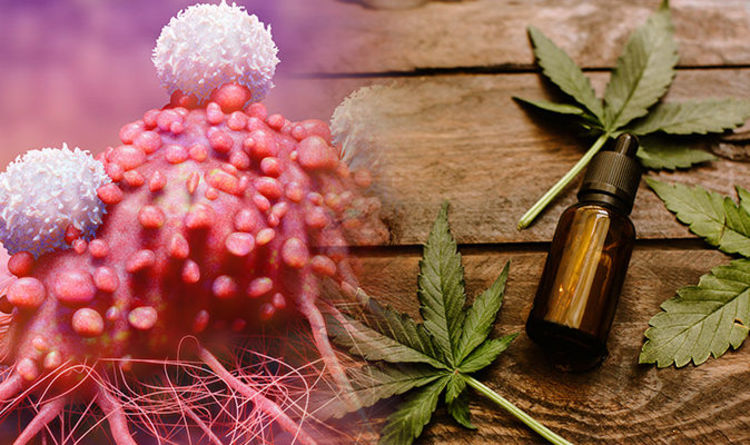 CBD oil, or cannabidiol, is extracted from the resin glands on cannabis buds and flowers.

It’s a type of cannabinoid which are the chemicals naturally found in marijuana plants, and it’s usually mixed with a carrier oil, like MCT (a form of coconut oil).

While it comes from the cannabis plant, CBD does not create any form of intoxication. Another cannabinoid, THC, causes this, but this substance is illegal in the UK.

Since the beginning of the year, CBD oil has been available on high streets in Britain.

Some Britons have claimed the oil has cured or helped treat their health conditions, in particular cancer. But can it actually be used to help fight the disease?

Cancer charity Macmillan said it is still unclear whether using cannabis has any anti-cancer effects. But there is some evidence that the chemicals in cannabis might help with symptoms such as nausea and pain.

It adds: “For example, some drugs that have been developed using the chemicals in cannabis have been effective in treating sickness caused by chemotherapy, or improving a person’s appetite.

“But these studies have had mixed results when used in clinical trials. Because of the mixed results, the general feeling of experts is that there needs to be more research into the chemicals found in cannabis and their possible benefit.”

Anyone considering using cannabis oil as a treatment for cancer or other health conditions should first consult their GP.

The charity also lists three important things to keep in mind if you’re thinking about using it:

Buying it online can be risky. One reason for this is because you don’t know what your are getting, for example how pure it is.

Cannabinoid THC can increase your heart rate, cause dizziness, hallucinations, paranoia and make you feel ‘stoned’. They may also interact with other drugs.

The cannabinoid delta-9-tetrahydrocannabidiol (THC) and products that contain THC are illegal in the UK.

He said: “This isn’t prescribed by a GP or Pharmacist at present, as we still don’t know the full side-effects, so I would not personally recommend this as a medical practitioner.

“I would always recommend anyone wanting to take any medicine that isn’t registered with the General Pharmaceutical Council to do so with caution and almost always have a chat with your Pharmacist or GP at your next visit to take their advice.”

This week Charlotte Caldwell, whose 12-year-old son Billy has a severe form of epilepsy that can give him up to 100 seizures a day, was stopped by officials at Heathrow after trying to “openly smuggle” illegal cannabis oil into the country from Canada.

Last year Billy, from Castlederg, Northern Ireland, became the first child to be prescribed cannabis oil on the NHS – and his condition improved immediately, reportedly going 250 days without a seizure.

However the Home Office overturned the ruling and his GP was ordered not to renew the prescription.

What else could CBD oil treat?