Level Brands recently went through a Corporate re-branding if you will, and in early May renamed itself to cbdMD Industries, Inc. At the same time in a smart branding move they changed the ticker symbol to YCBD to better reflect the new focus on their line of CBD products and national branding and sales.

The parent company formerly known as Level Brands acquired what is now cbdMD from its owners via the issuance of 15 million shares in YCBD in late December 2018. The acquisition was timely as it was just after the Farm Bill passed allowing CBD to be mass processed, sold, and distributed in the United States.

They now own and operate the nationally recognized consumer cannabidiol (CBD) brand cbdMD, with the website cbdmd.com whose current products include CBD gummies, CBD tinctures, CBD topical, CBD bath bombs, CBD oils, and CBD pet products. The Company also operates a licensing and corporate brand management businesses under the kathy ireland® Health & Wellness; Ireland Men One (I’M1), and Encore Endeavor One (EE1) brands, as well as a personal products division Beauty & Pin-Ups. However, those are ancillary businesses and not the focus of the company in terms of revenue.

What is CBD and why is this taking front stage in the health and wellness sector? Turns out the human body has its own form of internal CBD if you will which helps with homeostatic regulation. Taking CBD supplements can help with multiple indications and its partly why this market is growing exponentially. Real results are being seen and testimonials are all over the internet on Amazon and other sites where CBD is being purchased. Review the snippet on ECS from the YCBD Investor Presentation below:

As more and more studies are being completed and frankly anecdotal and testimonial evidence of the benefits of CBD for the human body, the Tipping Point of both consumer and investor recognition is at hand. It’s difficult not to bump into CBD products distributed in various establishments such as Hair Salons, Spas, Drug Stores, and retail outlets on a daily basis.

With the massive growth industry for Cannabis really taking off after the Farm Bill (Allowing Hemp production in the US etc) investors are looking for ideas to invest in. The obvious areas being the Multi-State operators of Dispensaries and Cultivation plants such as Cresco Labs, Curaleaf and others. However, all of those companies are dealing with massive regulations in all 50 states, each of which differ dramatically in many cases. CBD is widely distributed and being accepted for consumer and pet use as this trend continues to move quickly into the public lexicon.

cbdMD is the only pure play US Listed stock as it relates to CBD products exclusively and the CBD market. The distribution points are exploding and at a tipping point for sure. cbdMD reported they are now in 2,000 outlets up from 600 at the end of December, more than triple the number just 4 months ago!

CBD products are rapidly expanding into into CVS, Walgreens, and soon Target and Walmart. Not only that , but they are in many hair salons, health and wellness shops, and soon likely at your local pet store if not already, and more, they are everywhere and exploding into the public awareness.

CBD has been shown to help with Sleep conditions, Stress , Inflammation, Pain management, Anxiety and more. There are no known side effects. CBD is not just for human use, the explosion in Pet Treatments alone is massive, and now Bubba Watson, the two time Masters Champion, is also endorsing cbdMD.com products himself and is wearing their logo on his Golf Hat now on the PGA tour. They also signed a deal with Ice Cube for his 3 on 3 league basketball league which is growing fast expanding from 8 to 12 teams this year and will be on national TV his summer on CBS with the cbdMD patch on the jerseys.

The Founder and CEO of cbdMD, Scott Coffman, co-founded and started the BLU e-cigarette brand business in 2009 and sold it to Lorillard Inc. back in 2012. cbdMD.com is the new venture he started in mid 2017 and sales are now exploding with the Farm Bill being passed in December, which led Level Brands to close their 100% acquisition of cbdMD. The management team has a strong track record of building a brand and distribution successfully.

To wit, they just announced their 1st quarter calendar year results on May 16th and they already are seeing 58% sequential growth from the year ending quarter Dec 31st to the end of March 2019 quarter. Management stated in the conference call that they were running a full one year ahead of their internal sales projections already.

Here are Financial Highlights from the recent results

I listened in on the conference call and took some notes. Management indicated that they have now expanded into 2000 distribution outlets up from 600 at the end of 2018. They are also in discussion with numerous retailers and indicated that many of them are interested in CBD products on their shelves, but these large retailers are also being very careful about product selection and quality control. cbdMD believes this gives them an advantage as they have the production capacity and a very strong consumer track record in terms of quality of product, pricing, and consistent production controls.

Of interest, management indicated they plan to dramatically expand their Pet Products line in early June and this could place them in a #2 market position in the category. They also discussed a revolutionary consumer product which would be a 30 day CBD patch. Per the CEO Coffmans comments, no other manufacturer has been able to design one of these at a proper product cost, and they believe they are on the cusp of putting this on the market. This will be the first patch in this sector. 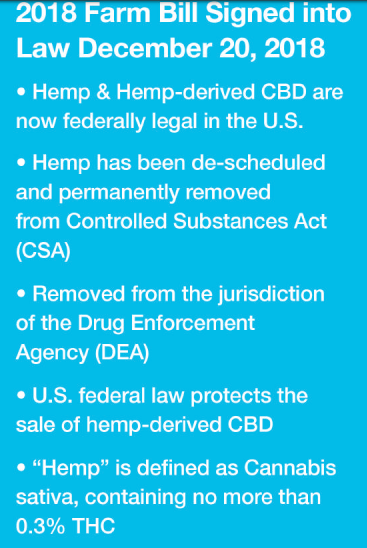 The key to this growth in my opinion is the Farm Bill passage opened up the doors to potentially explosive revenue growth. In addition to the 2,000 outlets, cbdMD has a strong E-Commerce presence where traditionally 80% of their sales derived, currently at 70% as the retail outlets carrying their products increase. With the Farm Bill behind us, this will likely continue to dramatically expand their shelf space footage around the country as well.

It is estimated there could be as much as $16 Billion in CBD industry revenues by the year 2025 from current estimates of $600 million to $1.8 Billion this year, according to Cowen and Company Research (as foot noted in the Investor Presentation linked at top of this article). Rolling Stone recently had an article on the industry estimating as much as $22 Billion. It’s anyone’s guess what the market size will turn out to be, but we know we are talking about 30-40x growth potentially over the next 5-6 years or so. None of this requires state approval of Marijuana licenses, Dispensary licensing, or medical marijuana approvals. The FDA is reviewing CBD for use in beverages and dietary supplements but they say they are maybe three years away from coming to full determinations on how to best regulate going forward.

If cbdMD captures a similar growth pattern to the industry projections, they could see sales increase from a projected 2019 20 million base to hundreds of millions within 5 years, if they just keep up with the projected industry growth rates. As over the top as that may sound, take a look at JUUL in the Vaping and Cartridge space, they have gone from 50 million to 1.8 Billion in four years time. That market may get dwarfed by CBD products.

From the current market cap of about 200 million with 30 million shares assumed, and only 13 estimated million in the trading float (Insiders control a high 63% of the shares), the stock could certainly see some upside perhaps in relation to the percentage revenue growth they deliver.

To take advantage of this awareness and industry explosion, the company has been working on national advertising as noted in the Investor Presentation below:

As stated prior, the retail and distribution network is really just getting started as we can see from the graphic below:

Retail and Wholesale distribution and growing 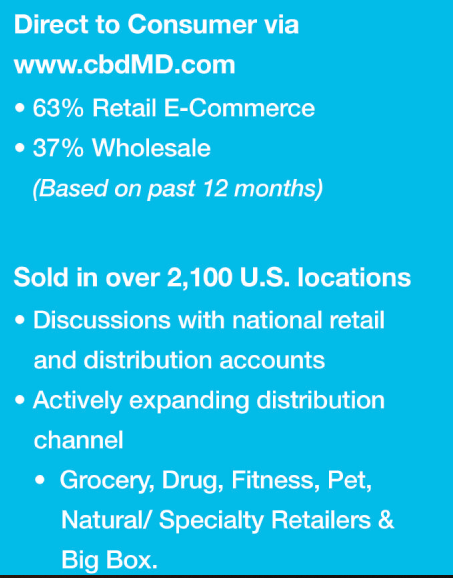 Obviously there are numerous competitors in the sector with likely hundreds of brands on shelves at mom and pop and eventually large box retailers like CVS and Walgreens and others pending. The company will have to manage the competitive threats and price their products competitively. Currently on their website cbdmd.com you can assess the product line against their peer group, and prices are very competitive. There should be enough room though in the industry for quite a few players and cbdMD has what arguably is a first mover advantage in that they are publicly traded, have access to capital, and have management with experience in building a national brand with the BLU e-cigarette line. 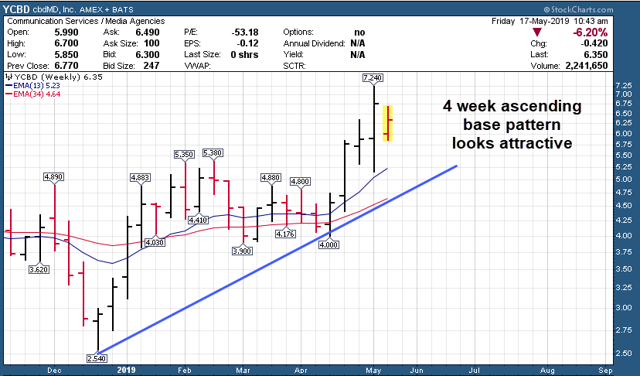 The Death of the Office – Outsider Club