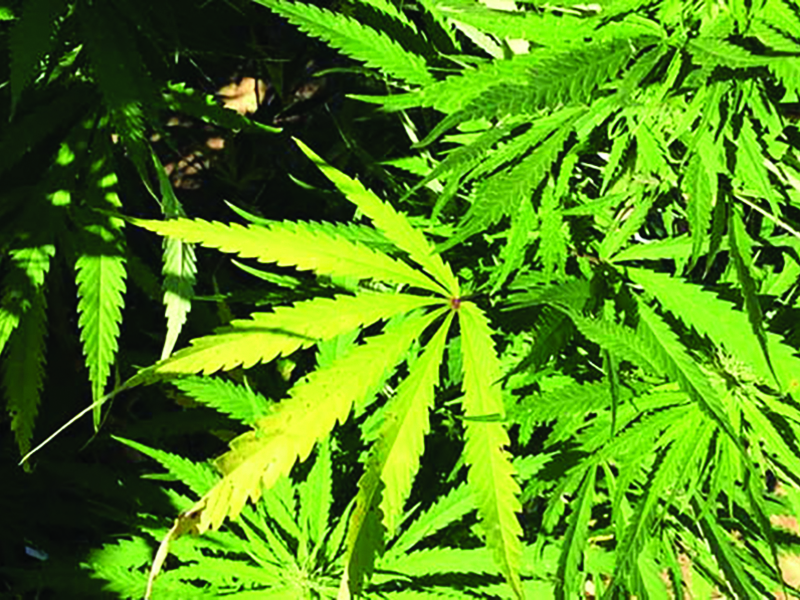 Federal research barriers on cannabis and its associated psychoactive and non-psychoactive byproducts have limited critical clinical trials in Michigan that seek to determine the effects of marijuana use on human health.

Despite the lack of research, Michigan is moving forward with rules that expand the sales of marijuana products for medicinal and recreational uses. Michigan now allows medical marijuana use for about 22 conditions and more are expected to be considered by the state’s Marijuana Review Board.

In response to the growing interest and sales, the Michigan State Medical Society has called for more research on the overall health effects from cannabis, especially the active ingredients such as THC (psychoactive tetrahydrocannabinol) and CBD (non-psychoactive cannabidiol). The medical society is especially concerned about the effects on adolescents and pregnant women.

While limited by federal laws, researchers at Wayne State University and the University of Michigan have been conducting studies on the use of cannabis and its effects on health, pain and social interactions.

Randall Commissaris, a Wayne State associate professor of pharmaceutical sciences in Detroit, is studying the effects of using marijuana or alcohol when driving vehicles. Kevin Boehnke, a research scientist at the University of Michigan’s Chronic Pain and Fatigue Research Center in Ann Arbor, has published three studies on cannabis, primarily focusing on why and how people use cannabis.

Some private researchers also are stepping up to the plate to look into the efficacy of the growing numbers of cannabis-related products, including CBD-based edibles and THC-containing marijuana products.

Jawad Shah, a neurologist in Flint and head of Insight Institute for Neurosurgery and Neuroscience, has received a license to grow medical cannabis and plans to conduct studies on use of CBD as an alternative to opioids for pain along with various neurological and other chronic diseases.

“(Cannabis) has a role, particularly in the opioid crisis. There are so many benefits that one can see for patients,” Shah said. “I see it all the time when patients come in with creams and oils” for pain and other conditions.

At Insight, Shah said the medical company has been extremely careful about how it approaches cannabis. “We have nothing to do with recreational marijuana. We don’t believe in it,” he said.

“We created a research facility and have a state license. The city (of Flint) has agreed. Our strategy is to grow marijuana for research purposes. We are waiting for clarification from the federal government as to where they stand on these things before we proceed to conduct clinical trials.”

Eventually, Shah said, Insight wants to grow cannabis, research it and then dispense medicinal cannabis produced by Insight to its patients and later to the public.

Steve Goldner, a pharmaceutical developer and CEO and founder of Inkster-based Pure Green, which also has a state license to grow medical marijuana, has developed his own line of low-dose CBD cannabis medications in tablet form for pain relief and other uses.

Founded in 2016, Pure Green also has completed or is conducting at least six clinical trials on cannabis, including research pain, migraine headaches, PTSD, opioid replacement and reduction and on canines.

Because of demand and plans to expand research, Pure Green recently relocated from Inkster to Au Gres in Arenac County where it has 100,000 square feet, five times its previous space for processing and research, Goldner said.

“We just completed a trial of 41 people in Dearborn to measure blood levels of diabetics who have neuropathy,” Goldner said. “The result was phenomenal. One hundred percent of patients got statistically significant pain relief. Even we were surprised with the results.”

Goldner said some of the patients used Pure Green’s CBD tablets and others received a placebo.

“We are about to run clinical trials under the FDA. We are very active in THC and CBD research,” said Goldner. “We are writing papers right now on three trials already run and three more in the planning stages.”

Goldner said clinics like Pure Green are able to more easily run clinical trials because some states like Michigan have regulators who are easier to work with.

“In cannabis, it is difficult to impossible within medical universities because they are concerned about losing federal funding,” Goldner said. “We do our research in medical clinics on products we grow and sell.”

Whether smoking, inhaling, chewing and swallowing, drinking or otherwise consuming marijuana has therapeutic benefits that outweigh its health risks is still an open question that science has not yet answered, Shah said.

Still, at least 33 states and the District of Columbia allow marijuana for medicinal purposes and 11 permit it for adult recreational uses and there is mounting anecdotal evidence for the efficacy of marijuana-derived compounds. However, the U.S. Food and Drug Administration has not approved medical marijuana, or cannabis.

Because the federal government has designated cannabis as a Schedule 1 drug, like heroin, LSD and ecstasy, for 50 years researchers have had to overcome many financial and regulatory barriers to study marijuana. A Schedule 1 drug is defined as a substance with no currently accepted medical use that possesses a high potential for abuse.

In 2017, the National Institutes of Health supported 330 projects totaling nearly $140 million on cannabinoid research, up from $111 million in 2015, according to the National Institute on Drug Abuse, a member institute of NIH that studies cannabis and other drugs. There also is an unspecified amount of independent research on marijuana being conducted primarily at universities in California and Colorado.

Obtaining cannabis for research also is limited because marijuana is illegal under federal law. Research includes some studies utilizing the whole marijuana plant, but most studies focus on individual cannabinoid compounds. The only approved samples of marijuana are from a research growing farm at the University of Mississippi.

But Goldner said the marijuana grown at the University of Mississippi doesn’t represent the more powerful marijuana sold in stores today. “All of the research at universities is unusable information for the general public. It is nice basic research, but we are interested in translational medicine where we can show the public what is safe and effective,” he said.

Shah said cannabis is a maligned drug that has great potential to treat chronic diseases and conditions, including epilepsy, seizures and chronic pain. “There has not been a single death from marijuana overdose. People died because they were impaired driving but not from an overdose,” he said.

Experts say Congress should enact a law that would downgrade marijuana to a Schedule 2 drug similar to cocaine and methamphetamine. The DEA says Schedule 2 substances have some medical value. Such a law change could open up cannabis research at universities, Boehnke said.

In November, a House committee approved 24-10 the Marijuana Opportunity Reinvestment and Expungement Act of 2019. If Congress approves, which appears unlikely in the Senate, it could remove cannabis from the list of federally controlled substances and allow more research. The proposed bill also would create a 5 percent federal tax that could be used to fund research.

Saqib Nakadar, an internist at the Doc Green clinic in Sterling Heights, specializes in medical cannabis consultations, pain management and alternatives to opioids.

“The majority of patients are dealing with some sort of pain issues, headaches, neuropathy,” Nakadar said. “There are other neurology problems like MS and epilepsy. Some are autism patients. They have pretty good success with CBD products. A lot of it is symptom management. It doesn’t make the disease go away.”

Nakadar was on the state’s marijuana advisory panel before it was phased out in December. Now he is on the Marijuana Review Panel, which will be assessing new chronic conditions that could quality for medicinal marijuana use, he said.

One concern Nakadar has is the lack of information on cannabis provided to the public by the medical community.

“Most doctors need to understand patients want to know about these things,” he said. “There are resources where patients can get help. It can be recommended properly as a medicine. I suggest doctors do their own research, learn about it. There is not enough information out there.”

Besides a range of cannabis products with varying amounts of THC concentrations, there are CBD oils, cannabis beverages such as cola, fruit punch, coffees and teas, edible cannabis chocolates, gummies, capsules, tablets and even dog treats.

Some cannabis oils and other infused products like vaporizers have exceedingly low traces of THC to get such desired effects as pain relief, anxiety relief or nausea relief. Some have higher THC concentrations to get relief plus a psychoactive reaction.

Even if more clinical trials were approved, experts like Goldner say there are difficulties to overcome in designing the tests. This is primarily because there are so many cannabis products for sale and all have differing quantities of THC and CBD, Boehnke said.

Difficulties also include attracting research subjects because of their fear cannabis is still illegal under federal law, and people who smoke cannabis also smoke tobacco, potentially interfering with conclusions on effectiveness, especially related to cancer.

Wayne State has several research projects underway, including the one by Commissaris, who runs a driving safety lab in the college of pharmacy and is studying the reaction time of people under the influence of marijuana or alcohol.

Commissaris said the driving simulation places subjects in a 2001 Chevy Impala and presents a road filled with obstacles to drive around.

“We collect data in a flight data-type recorder and look at driving performance using cannabis and while drinking,” he said. “We worked with medical marijuana patients for two years, but in December 2018 when recreational became legal we started working with them.”

Under the influence or marijuana or alcohol, the reaction time is longer, but much of it depends with how much is consumed and their tolerance level.

“We are still studying everything, but we are seeing a greater tolerance level with marijuana than alcohol,” he said. “If the subject has a history with marijuana they are less affected in the driving test. There is a little evidence of that with alcohol but more with marijuana.”

“There is not enough research on cannabis,” he said. “We want to do more, but it is complicated because the products and plants are highly variable in concentration.”

Another study is being conducted by Christine Rabinak, an associate professor in the WSU pharmacy college, who is conducting a study on the use of cannabis on (post-traumatic stress disorder) patients.

At the University of Michigan, Boehnke is conducting survey research on using medical cannabis as an analgesic and opioid substitute in chronic pain. He said more research is needed on the type of products for sale in the market.

Boehnke and his team have published three papers in the Journal of Pain and one in Health Affairs. “We are looking at the reasons people say they are using cannabis. By far the most common reason people use medical cannabis is for chronic pain,” he said.

“We see people substitute opioids and other pain medications with medical cannabis. They say it allows for better symptom management with fewer side effects. They say they have a better quality of life,” he said. “We find they use cannabis in multiple different ways.”

Boehnke said the stereotypical description of a young person smoking pot in a bong all day eating potato chips doesn’t hold up. “Most people are older and 65 percent are women using tincture-based products, topicals, edibles with CBD content,” he said.

But conducting clinical trials, while extremely difficult, is something the chronic pain center wants to try, he said. “There is a problem getting a Schedule 1 license. We will be soon. We are going to use FDA-approved cannabinoids,” he said.