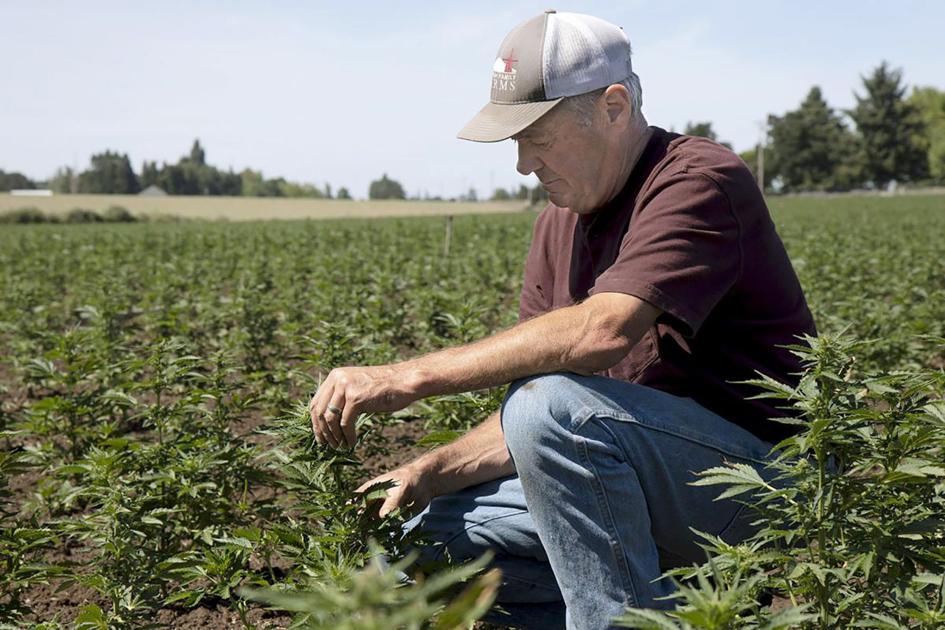 The Iverson siblings were so impressed with the way CBD helped ease their father’s last days that they decided to help others in the same way.

They dedicated 18 acres to hemp the first year and increased the acreage each year to last year’s 200 acres. This year they’re going with a more conservative 50 acres.

With the 2018 Farm Bill, hemp and CBD — the initials for cannabidiol, a substance that imparts a feeling of calm — became legal at the federal level and many national retail chains started carrying topical products.

Meanwhile, CBD growers are still waiting on the Food and Drug Administration for guidance on ingestible products.

“There are companies making tinctures and capsules and all those things that you don’t normally see in the large chains and a lot of people ended up sitting on the sidelines,” Ken Iverson said. “It’s also pretty easy to grow, which makes it easier to overproduce — plus, a little oil goes a very long way.”

The newly legalized market created a lot of questions for producers, he said.

“When we first started, we realized that things weren’t really put together yet and that we were going to have to figure it out ourselves,” Iverson said. “Our cousin, Tim Shaughnessy, was in the marijuana extraction business and thought CBD was a much bigger opportunity than that because it can be scaled.”

With their cousin, the Iversons formed FS Oil Extraction and at the time were able to finance their facilities as they went along. Red Barn Hemp, an enterprise of the family’s next generation, developed its own line of retail products sold through their website and at the farm’s gift shop, where it has met with great success.

“People started telling us what it was doing for them, though people react differently,” Iverson said.

The U.S. government has a patent on CBD as an anti-inflammatory, “so it should work really well on managing arthritis pain,” Iverson said.

“The most difficult part of this whole thing is finding good, reliable markets for the oil, and it does help because when I vertically integrate I’m able to capture the markets from each side of the business,” he said. “But being able to make the oil isn’t the answer; at the end of the day you still have to sell it.”

He predicts there will be a shakeout in the crop.

“It won’t be this thing that all these investor people are getting involved in, and the market will stabilize,” Iverson said. “The gold rush days will be gone; we’ll get good return and we’ll be stable.”

Hemp is a good fit for the region, he said.

“Here in the Willamette Valley we are a very specialized crop area and so naturally it would evolve to an area like us,” Iverson said.

It’s been 80 years since hemp fiber was widely used in the U.S., but if a market for it emerges Iverson thinks it will be more of a Midwest crop.

“The fiber is just more of a commodity,” Iverson said. “It has lower margins, but in the corn, wheat and soybean areas it would make a good rotational crop.”