Suffice it to say, the marijuana stock craze is cooling… In fact, it’s been an absolute bloodbath over the past 45 days, with cannabis stocks down an astonishing -60% across the board.

This newfound industry is now going through its growing pains and in my opinion, the sector will branch out into new opportunities to come.

One of those opportunities showed up in 2018 with the passing of the US Farm Bill. Buried in that bill was the legalization of industrial hemp.

In this first part of my two-part series on hemp, I will talk about Cannabidiol (CBD), one of the active ingredients in hemp that holds medical, health and investment opportunities for the savvy investor.

In part two, I will review other products that can be derived from the hemp plant, and discuss related investments in industrial hemp.

But first, let me give you a 5-minute brief summary on the history of hemp.

A Brief Overview on Hemp

Hemp is part of the cannabis family. It is the cousin in the family that has miniscule amounts (0.3% or less) of the active ingredient (THC) that gets you stoned. It literally has little to zero psychoactive effects on users.

Hemp has been around and used extensively since the dawn of civilization over 10,000 years ago.

Hemp is quite literally a wonder plant. It has been used for thousands of years to produce plastic, oil, paper, food, fuel, and clothing equivalents. An article in Popular Mechanics back in 1938 listed a whopping 25,000 different products that could be produced from this incredible plant![1]

From the Declaration of Independence being drafted on hemp paper, to some of the founding fathers cultivating hemp plants for industrial use, hemp has been deeply interwoven into US history.[2]

It was a major cash crop here in the U.S. up until 1937 when it was mistakenly lumped together with its cousin ‘marijuana,’ the plant that gets you high, and placed under a heavy tax that discouraged cultivation.

In 1970, President Nixon and his War on Drugs made all cannabis, including hemp, illegal with strict punishments for possession.

Nixon took it a step further and identified all cannabis as a Schedule 1 drug along with heroin, cocaine, and LSD, among others. This classification put cannabis, and subsequently hemp, in the group of drugs seen as having “no currently accepted medical use and a high potential for abuse.”

This legal move made the plant off limits to everyone, even scientists wanting to do research.

Fast forward 35 years to 2004 when the Ninth Circuit Court decided in favor of protecting the sale of hemp foods and body care products.

This single decision was the crack in the door to bringing hemp back to a legal status.

Ten years later, President Obama signed the beginnings of the farm bill with a provision for hemp farming for research purposes.

Fast forward again four years later… In 2018, the Hemp Farming Act was passed as part of the US Farm Bill. The bill removed the hemp plant from its illegal status and opened the gates to cultivation and full scientific research.

Cannabidiol (CBD) is one compound found in the flowers and leaves of the hemp plant.

CBD oil should not be confused with hemp oil. Hemp oil is derived from the seeds and contains no CBDs.[3]

Now with the removal of Hemp from being a Schedule 1 drug, scientific research is moving forward at an exponential rate. With that research, CBD oil has been found to have a multitude of medical uses.

Dozens of studies have found evidence that the compound can treat epilepsy as well as a range of other illnesses including anxiety, schizophrenia, heart disease, pain relief and even cancer.[4]

It’s not clear how CBD works. This is partly because it stimulates multiple biochemical pathways, which may account for its wide range of effects. The compound is a powerful anti-inflammatory and antioxidant, and it increases levels of the neurotransmitter serotonin as well as another molecule, anandamide, which reduces pain and anxiety.

Further research is much needed to unlock all the secrets hidden in the CBD compound.

Forget THC! CBD Could Be The Industry’s Future Money Maker

The CBD market is just heating up as more people learn about the positive effects on health and well-being.

“What we started tracking this year was an explosion — face mask, bug bites, skin care, topicals,” says Bethany Gomez, director of research for the Brightfield Group, who shared the analysis exclusively with Rolling Stone. “It’s being used for everything you can think of — sports, triathlons. People want to buy it for their grandma, for arthritis. Women get it for PMS and endometriosis — common things that people have been using over the counter medications.”[6]

GW Pharmaceuticals (NASDAQ: GWPH) earlier this year became the first drug developer to have the US Food and Drug Administration approve a CBD-derived therapy.

And thousands of Americans are using strains of cannabis with a strong CBD content. Advocates and medical marijuana dispensaries agree that as awareness about CBD grows, so does demand.

Just How Big Is the CBD Industry?

Brightfield Group estimates the market size of CBDs will be $22 billion by 2023.

Compare that to some of the growth estimates for marijuana, which call for a CAGR of around 25%, and you can see why CBD could be the new darling on Wall Street.[10]

What is Fueling CBD’s Growth?

According to the Brightfield Group report, one factor fueling CBD’s growth is distribution via major pharmacies, grocery store chains and convenience stores.

Some of the recent announcements for CBD retail sales include:

It needs to be mentioned that the Food & Drug Administration (FDA) following the farm bill’s signing stated that any cannabis product, hemp-derived or not, that claimed a therapeutic benefit had to get FDA approval before it could be sold interstate.

The FDA’s concern is strict on outrageous claims made by products sold to consumers without scientific support or evidence. While there may not be any issues concerning the safety of any CBD products currently being produced, the FDA has its hands full in determining the future of CBD approval to consumers. Hemp-derived CBD remains in regulatory limbo right now at the national level.

Secondly, the major Canadian cannabis producers are making moves into US hemp markets. Canopy Growth (NYSE: CGC / TSX: WEED), Aurora Cannabis Inc. (NYSE: ACB / TSX: ACB) and Tilray (NASDAQ: TLRY) all are now active in the US with the signing of the US Farm Bill in 2018.

Canopy Growth (NYSE: CGC / TSX: WEED) has probably made the biggest push into the US so far. In January of 2019, Canopy was awarded a hemp-processing license in New York, with the company announcing plans to spend up to $150 million on a processing facility in the state. 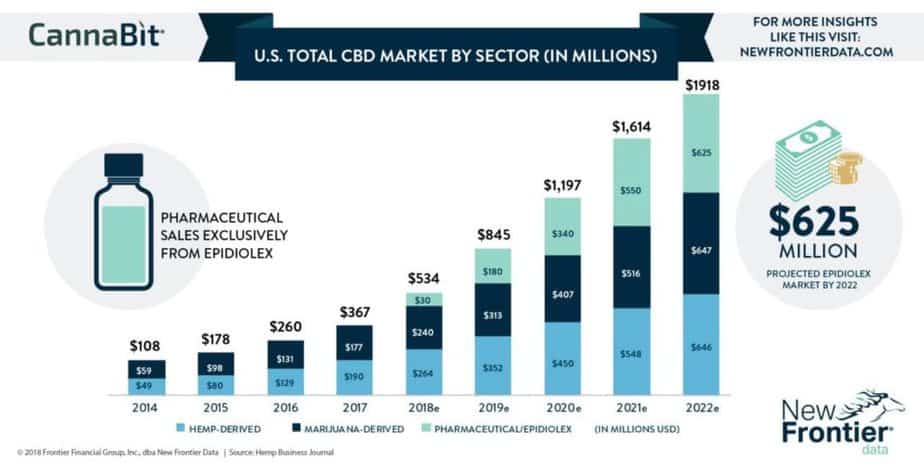 The recent upswing in interest and sales in the CBD sector is a boon to any savvy investor and should not be ignored.

This doesn’t discount the fact that Canopy Growth has been hit hard as of late in the capital markets due to poor reporting of its quarterly numbers.

The fact that the company is leveraged in the hemp sector, I believe, may present a buying opportunity for investors if Canopy Growth finds its bottom. This is after all, the Amazon of weed stocks!

5 Hemp / CBD Stocks to Add to Your Watch List

Below are 5 market mover stocks that I found in my research:

The company is well-known for its efforts in the field of biotechnology, and after the legalization of hemp, the company has diversified to include CBD as well.

The company already has its first legal hemp cultivating license and continues to advance its hemp operations.

They currently have distribution with major retailers such as Kroger (NYSE:  KR) and CVS (NYSE: CVS) stocking their products.

The stock suffered in August as it reported an earnings and revenue miss. Investors can pick it up at a steep discount as it has fallen by over 50% since their missed earnings call.

Despite the miss, revenue grew by 45.3% year-over-year. Although profits fell from the four cents per share in the same quarter last year, operating expenses nearly doubled to fund expansion.

The company has transitioned to CBD as the demand for dried marijuana has waned recently. It now offers an extensive line of CBD products.

APHA stock also offers a low valuation and trades at just over 9.5 times sales, which comes in well-below many larger peers.

The company dominates in the state’s medical cannabis market with a market share of nearly 50%.

The medical cannabis market in Florida is estimated to be worth more than $1.7 billion by 2022.[16]

With its current market share in Florida, the company could be looking at annual sales of about $800 million in the next couple of years based on that market estimates.

Also, Florida is looking at legalizing recreational marijuana by 2020. If that happens, Trulieve will be in a very good position to capitalize on that additional new market, based on market estimates.

Additionally, the company’s expansion into California, Connecticut, and Massachusetts should enable Trulieve to continue to see sales grow.

Hemp CBD: The Next Phase of the Green Revolution

As the marijuana market matures and reaches a saturation point, it is only natural for marijuana companies to look at other opportunities to diversify and expand sales growth.

Hemp is that natural next step as it is the go to cousin of marijuana and produces large amounts of CBDs that are already becoming a consumer hit.

The green revolution is only in its early phases in my opinion. We will continue to see hemp and marijuana take a dominate role in our daily lives and drive future economy.

Stay tuned for part 2 of my hemp article, where I will be taking a closer look at industrial hemp and all the market possibilities for investors.

P.S. To discover more opportunities in the hottest sectors in North America, sign up now to the Financial News Now newsletter to get the latest updates and investment ideas directly in your inbox!

DISCLAIMER: Investing in any securities is highly speculative. Please be sure to always do your own due diligence before making any investment decisions. Read our full disclaimer here.