Recently, I had the chance to try out some new CBD based products aimed at golfers from the guys at Golfers CBD. You can check the original article here to find out more about CBD and the company, but when I was sent the products originally, I was only able to try the CBD oil for everyday use as it was at such time the courses had just closed due to the pandemic hitting the UK.

However, since the game resumed, I have had many opportunities to play, getting back out on the course, so I wanted to write this follow-up describing my experiences with the three products I was sent.

The Oil is the product I have probably used the most frequently. Both on and off the course. I have noticed sleep patterns have improved since using the oil. As for my golf game, I will try and use two or three drops before play, then maybe another drop or two halfway round. As someone that can get fairly hot under the collar if I hit bad shots/make a bad score, I have really noticed a difference in my ability to just let things go and carry on. A nice calmness to my game is an added bonus that I could have done with and some recent scores would definitely show this.

I take this daily, once or twice, and even my wife has noticed how relaxed I was during lockdown – especially with all the kids at home! 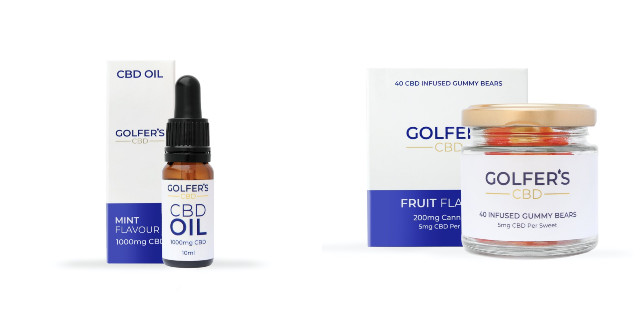 I have been putting about six to eight Gummies in my pocket as I head off to play. It’s worth pointing out that I haven’t mixed my gummy and oil use on the course. I have always had one or the other and finding I’m getting the same effect, but the gummies do come with the added benefit of being something nice to chew on. I take two or three before the round and then when needed, between holes, helping me feel fairly relaxed during play.

This wasn’t a product that I was originally sent. During the lockdown period I decided to keep active by running – something which I had never done before. What I had noticed that whilst doing a LOT of running through April and May, when the courses did open back up I was getting some pain in my knee (suspected from the fact I was running on roads rather than soft ground). So out of pure curiosity, I got the guys to send me some of the balm to use to see what effect it might have and within a few days it has definitely eased the pain. Definitely one to hold onto as age catches up with me too!

See for yourself and check out these three and the other range of products by visiting www.golferscbd.co.uk.