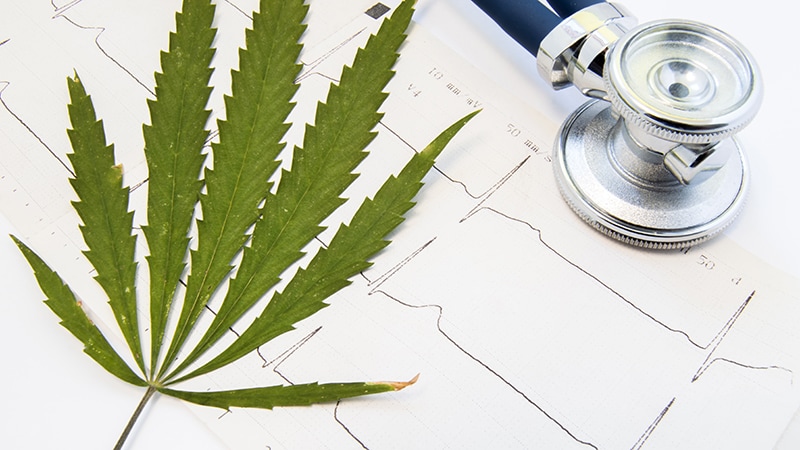 With 11 recreational-marijuana states, 33 medical-use states, and a groundswell of state marijuana ballot initiatives teed up, researchers and cardiologists are questioning what this means for Americans with cardiovascular disease (CVD).

Patients are asking as well, said Muthiah Vaduganathan, MD, MPH, a cardiologist at Brigham and Women’s Hospital and Harvard Medical School in Boston, and coauthor of a new marijuana review article, published in the January 28 issue of the Journal of the American College of Cardiology.

“This was actually a multidisciplinary team of general cardiologists, pharmacists, transplant physicians, transplant cardiologists, and interventional cardiologists and, in each of our practices, we had independently seen patients coming into either our clinics or the hospital setting and asking us about the safety of marijuana use in the context of their cardiovascular conditions,” Vaduganathan said in an interview.

“We felt responsible as medical researchers, as well as cardiologists, in promoting the best level of science and in conveying the best information. So that was what prompted, initially at a patient level, this particular review.”

The authors call for “routine screening for marijuana use” and a “broad commitment” from government and researchers to pursue marijuana-related research to clarify the CV safety profile. They cite the increasing use and potency of marijuana and a spike in reported cannabis-related adverse health effects.

In 2016 and 2017, more than 39 million Americans reported using marijuana within the previous year, according to the annual National Survey on Drug Use and Health. Still, the number of users is shifting with the changing legalization landscape. In the first 12 days of 2020, for example, sales of newly legal recreational marijuana reached $19.7 million in the state of Illinois alone.

Observational studies have suggested an association between marijuana use and a broad range of CV risks, such as myocardial infarction (MI), arrhythmias, and cerebrovascular events, but “the level of evidence has not been robust,” the authors conclude.

Using NHANES data, the authors estimate that of the 90 million adults who reported ever using marijuana or hashish in 2015 and 2016, 2 million had cardiovascular disease.

“For the first time, there are more marijuana users in the United States that are estimated than cigarette smokers,” Vaduganathan told theheart.org | Medscape Cardiology. “While public health resources and interventions have successfully targeted cigarette smoking and as we commonly ask about cigarette smoking in cardiovascular clinics, we often neglect marijuana.”

“When you actually look at the chemical toxin profile of the combustion products of marijuana compared with tobacco when both are smoked, it’s actually quite comparable,” he said. “So we would anticipate that the cardiovascular and pulmonary effects may also be similar.”

When marijuana is used in other forms, including edibles and oils, it may have physiologic effects that still affect the cardiovascular system, Vaduganathan observed. For instance, it may enhance sympathetic nervous system response and increase heart rate and blood pressure, which can be problematic in patients with cardiovascular diseases, especially those with known hypertension or arrhythmias.

Concerns have also been raised about potential interactions with commonly used cardiovascular drugs and cannabinoids, including THC and CBD, which are metabolized by the cytochrome P450 enzymatic (CYP) pathway in the liver.

“We know that there’s an interaction and that these drug levels are expected to increase,” he said. “What we don’t know is the duration of time they’ll increase or if various modalities of marijuana use actually would have differential effects on drug levels.”

For drugs that can be monitored, like warfarin and tacrolimus, Vaduganathan said more frequent monitoring is recommended, but “for ones where we don’t have a clear ability to monitor drug levels, we don’t know how best to guide those decisions.”

To theheart.org | Medscape Cardiology, Salim Virani, MD, PhD, a cardiologist at Baylor College of Medicine and the Michael DeBakey VA Medical Center in Houston, said that the issue of marijuana use is on the radar of cardiologists but that there’s always this question about the strength of the evidence.

“As the authors very clearly point out in this review article, the evidence we have is all observational,” he said. “Is it causal or not and, if it’s causal, what is the effect size or the magnitude of that effect? That is what we really want to know.”

Nevertheless, “I would like to point out that, even if the harms are small compared to some of the other risk factors that we may be aware of, like diabetes or smoking, if such a large proportion of the population is using it, then even a small effect size in terms of a detrimental impact can be really, really big at the population level,” said Virani, who also chairs the American College of Cardiology (ACC) Prevention of Cardiovascular Disease Section.

Although the American Heart Association (AHA) has issued scientific statements dedicated to hookah smoking and e-cigarettes, neither the AHA nor the ACC has issued a similar statement on marijuana, likely because of the paucity or limited scope of the data, suggest Virani and Vaduganathan.

Right now, the only scenarios the authors could identify in guidelines or key documents where screening for marijuana is routinely done or mandated is before transplantation and before consideration for advanced therapies for patients with advanced heart failure, Vaduganathan told theheart.org | Medscape Cardiology.

“In all other circumstances — even at the time, for instance, of myocardial infarction or new heart failure presentations or new atrial arrhythmias, and despite all these scenarios being higher risk and potentially associated with marijuana use — there’s no regimented screening pathways and certainly cardiologists aren’t routinely doing it in practice,” he said.

The authors say cardiology specialists should be aware of local regulations and the legal status of marijuana products in their state and, whenever possible, ask about frequency, quantity, and method of use.

“I think a risk-based screening makes sense as a first step, as we learn more,” Vaduganathan said. “Our highest-risk patients for recurrent events are those who have been recently hospitalized for acute CV events, like myocardial infarction or new heart failure presentation. And these patients should not only be screened but, in our opinion, counseled to lower or stop use of marijuana, especially during this high-risk window.”

Vaduganathan currently screens his patients, especially younger patients, who newly present with CVD. In the Partners YOUNG-MI registry of patients with a first MI before age 50, marijuana use was reported in 6% and associated with twice the hazard of death, even after adjustment for tobacco use.

Explaining that marijuana may affect levels of key heart drugs is often enough of a rationale for most patients to overcome privacy concerns and open up, Vaduganathan observed.

Physicians, however, may struggle with these conversations in the absence of definitive evidence that marijuana use is detrimental to cardiovascular health, Virani said. Still, they should consider screening in young patients who present with CVD of unknown etiology and those taking multiple CV medications that may interact with marijuana.

Although the AHA’s recent announcement of a $20 million grant initiative to tackle youth vaping is a positive step, both men lamented the lack of dedicated research on marijuana and CV health.

“This review article definitely brings up a lot of those questions that we’re having out there,” Virani said. “In terms of research, I think one aspect is getting the knowledge base stronger, and the second is, well, okay that’s great, but then how do we take this information back to our patients?”

Vaduganathan is supported by the KL2/Catalyst Medical Research Investigator Training award from Harvard Catalyst; has served on advisory boards for Amgen, AstraZeneca, Baxter Healthcare, Bayer AG, Boehringer Ingelheim, and Relypsa; and has participated on clinical end-point committees for studies sponsored by Novartis and the National Institutes of Health. Virani reports grant support from the Department of Veterans Affairs, World Heart Federation, American Heart Association, and American Diabetes Association; and honoraria from the American College of Cardiology.